Canada GRK9 of the Month

A Big Congratulations to this TRIO! Meaghen and her two awesome dogs Molson and Cooper! Meaghen is still fairly new to Grassroots K9, but in that little time she has worked extremely. She is showing dedication, asking all the right question, eagerer to learn more and enhance her dogs training. We have asked her to answer a few questions in regards to her training and to give us some insight on Molson and Cooper!

1. How old was Molson and Cooper when you got them?

Both dogs were around 9 weeks when we brought them home.

2. Where did you get them from?

3 Why did you pick them?

Molson: His photo was him on his back with a silly face. When we went to meet him, he had just woken up from a nap and lazily walked around the corner toward us. That was it.

Cooper: He was the last of his litter left to be adopted out. Funnily enough I had pointed him out to my husband 2 weeks earlier about how cute he was. We were on the fence about another puppy and decided not to adopt another one jsut yet, but learned he hadn't had any applications for him, so we went for it.

4. Why did you want to begin training?

Cooper needed it. Cooper has always been a relaxed dog in ALMOST everything. We've noticed that when we're walking on leash, Cooper lunches and barks at other dogs. However, when other dogs come towards him, he would run away. He's also very possessive of Molson. Molson loves to play with other dogs and socialize but since Cooper came along, Cooper will bark and bark and bark and circle Molson and any dogs he's playing with. We then noticed that Molson was almost feeding off that energy and started growling at other dogs if Cooper was barking at them. Molson would bark and chase other dogs if Cooper was barking and running away. It wasn't normal behaviour for Molson to act that way so we realized we needed to nip it quick. We also one day hope to start a family and wanted them to listen better when we ask.

5. What was some of your training goals?

Loose leash walking is a big one. Preferably we want them to be able to walk together comfortably without having to fight for "who is in front".

Cooper reacting to other dogs and men the way he does. He's not particularly aggressive but he definitely makes himself heard. He's more bark than bite.

RECALL. Coming when called is a big one. They generally come, but if there

are distractions then we are calling 3-4 times and bringing out the angry parent voice.

6. What was the biggest obstacle to overcome during training?

Recall is tough. They aren't chasing after the toys or treats when we toss them. It's hard to call them back to us when they won't leave our sides. They've only done a week each at the board and train and that was only a few weeks ago, so it's something we're still working on rather than have finally overcome it.

7. What are you guys working on now?

Walking separately is still hard. My husband works late so it's generally me walking them when I can, and admittedly with the winter weather setting in, I am not interested in doing 2 separate walks. Summer weather - bring it on, but when it's cold out I'd rather have one and done.

We're also still working on recall. It's tough because we're finding that they are just not chasing after the treats we throw, or the toys. We've tried inside and outside. It's like they know we are trying to train them and they are ignoring it. It's hard to work on calling them back when they won't leave your side! We're learning to choose out battles and instead of doing scheduled recall every day for 15 minutes, we've invested in a clicker and we're trying it whenever we can throughout the day. Whenever we see they are interested in a toy or wanting to play fetch, we pounce on trying to train. It doesn't always work but we're sticking with it.

We're still working on "mark". When someone knocks on the door or rings the doorbell, the dogs go crazy. We're continuing to reinforce them to sit or lay on their beds. It's tough but hopefully it will pay off in the long run.

8. If you could give any of our clients advice about accomplishing your training goals, what would it be?

Just stick with it. Training is hard. It's especially hard if you're got stubborn dogs that aren't working with you. If they don't seem to be interested in training at that moment, oh well. Forget it and try again later. Too many times we've gone downstairs to train and Cooper has just laid there and done nothing. It becomes so, so frustrating and makes me want to tear out my hair and cry because it's like he's learned nothing even though I KNOW HE KNOWS how to do it. Forcing the training doesn't work for us. Also trying different ways to train. Take them outside and play for a bit first. Do training outside if you think it will work. Change the environment. Anything to keep it fresh and to keep your peace of mind as well.

Take your wins when you get them and accept the losses when they happen. Every time I would do recall, I would want Molson to come and sit directly in front of my legs. He would do it but not close enough. I found that when I asked him to move closer, he would lay down instead. At first I was annoyed but I realized that it was still a win. He was still in front of me, paying attention, and his feet her touching mine (or close to it). He was still doing what I wanted him to do, but he was doing it in his way instead of the way I wanted him to do it. Once I started letting go and accepting him to lay down instead of sit there, I became a lot more relaxed in the training and so did he.

Keep in touch! I've already reached out to the trainer who I primarily worked with when I've become frustrated, just looking for advice or different ways to do something when I found it wasn't working for us.

Join Our Team- Donate to Cops for Cancer 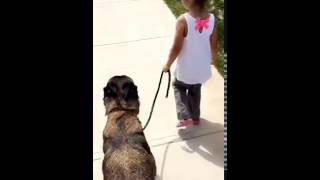 Coconut Oil for your Pups

GTA GRK9 of the Month

Ottawa GRK9 of the Month

Maryland GRK9 of the Month